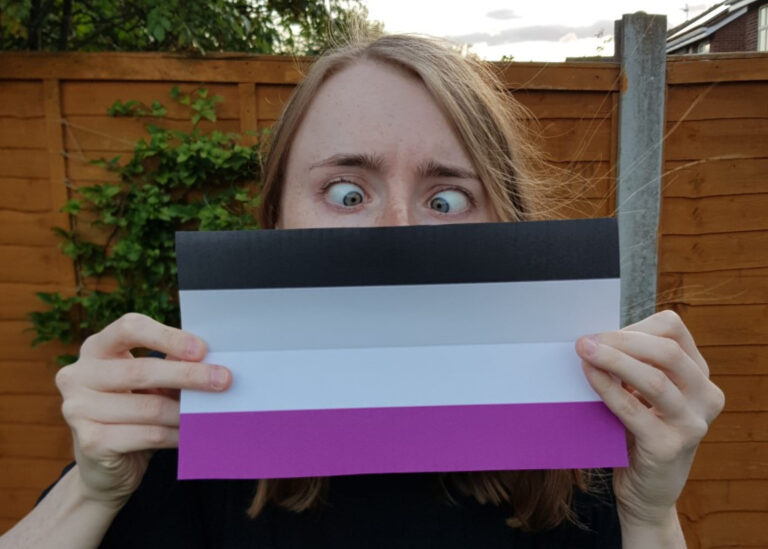 “Exploring the world of asexuality through the eyes of someone who literally does not give a fuck.”
This piece will explore the notion that sexuality and sexual cues/thoughts are a hidden language within society; for most people these are inherent and naturally understood. For the estimated 1% of the population who are asexual, it is a different story. Most grow up with feelings of confusion, enhanced by the hyper sex-focused media and the normal promiscuity of young adult life.

Emma Bourke is a part of Chaotic Neutral Theatre Company. Extro-Terrestrial, five introverts abducted by a
race of extroverted aliens, premiered at Edinburgh Fringe 2018, receiving a 4-star review. Sex-Ed Cabaret tackles LGBTQ+ inclusion in school sex education, performed at FUSE Festival and Worcestershire Pride Sexuality Showcase, 2019.
From 2016-20, Emma worked for Shenanigans Theatre Company, where they toured nationally and internationally. Their productions were selected for NSDF (Skellig) and Prague Quadrennial (Club Paradise), where they gained skills in bunraku and shadow puppetry, and in that of cabaret performance. As a solo artist, Emma trained at Arena Young REP, performing in the verbatim Blackout at Birmingham REP, 2015. They performed at Wolverhampton Arena Theatre in BakToSkool, 2017 and completed a week-long mask acting workshop with VAMOS in 2019. In 2019, Emma was also commissioned by Beeline, alongside Strange Futures, with The Tale of the Baba Yaga, developing their skills in bunraku and shadow puppetry.