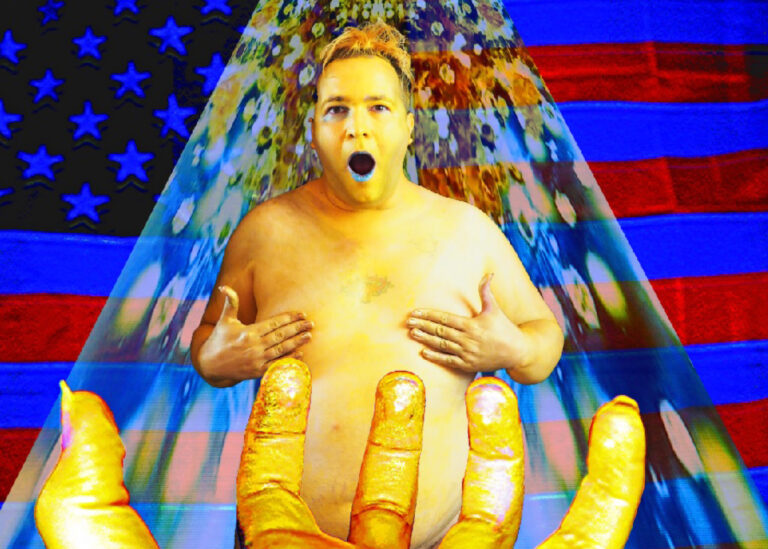 Join SHOUT Festival 2020 in giving Alex Billingham a golden shower as they drown your screens in glitter.

Unlike Midas everything Trump touches turns to scum. On November 3rd 2020 America will vote to remain a democracy or become another dictatorship doomed to fail. The result will alter the world so Scream into your screens with rage or joy and remind American Queers that they are not alone.

Initially performed in response to Trump’s 2016 election Alex has reworked it for this current crisis. Acting as a release for the despair and outrage embodied in people like Trump, Putin and Boris. Adopting their live art practice for the digital cabaret we find ourselves trapped within Alex will shower in glitter, letting the golden scum seep over them. Allowing themselves to be vulnerable, showing the scars and stretch marks of their existence. Then washing away the gilded filth of hatred.

Drench yourselves in the golden shower that is Glistening Scum.

We will survive together.

Alex is a genderqueer artist based in the West Midlands working as a curator and performance artist. their work mixes performance, endurance, visual arts, low-fi tech, film and installation in an often visceral and physically exhausting way.
Alex is intrigued by the points where technology and our fear of it meet and has a particularfascination with the fetishization of Nuclear dread in Western media from a queer perspective having made their first theatrical show (Nuclear Tides) touring the UK (suspended by Covid)

Alex works as associate curator for Vivid Projects Live program and as co-director of FailBetter, running their residency program. they are a Black Hole Club alumnus and a member of Eastside Projects EOP and has performed nationally for ]performancespace[ -Folkestone, Little Wolf Parade -Nottingham, Word of Warning -Manchester, and Edited Arts -London.