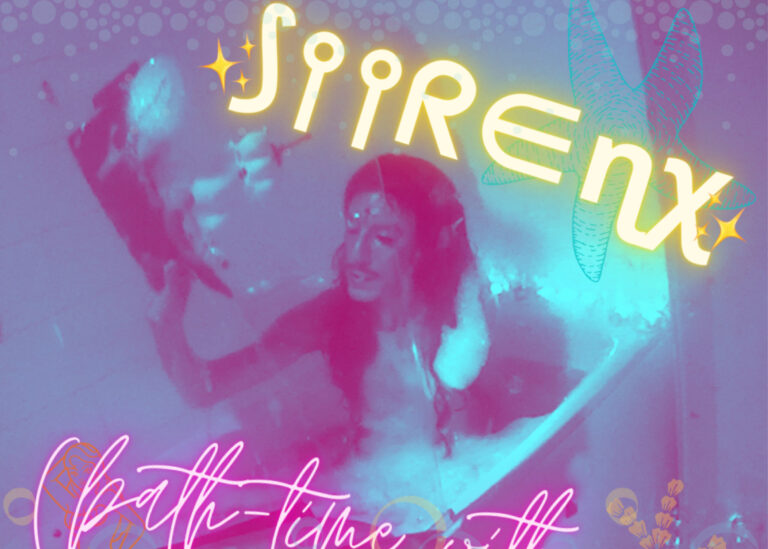 ‘SIIRENX (Bath~time with a Mer~thing)’ is a new, live~streamed, multisensory performance from Sebastian H-W examining how we might decolonize Eurocentric ‘myths’ and ideals around gender, queerness, self-care, magick, ‘monsters’, limitations, transformations, and displacement – through the character~cryptid of the SIIRENX; your local land~locked~down ‘Mer~thing’ (a genderfluid ‘mer~man~maid’).

Expect the unexpected: from lockdown confessionals, to ritual magick mer-potion making in your bathroom sink, and even a little queer house party celebration… ‘SIIRENX’ is inspired by, and casts critical commentary on, Christopher Columbus’ colonial legacy and supposed sightings of “mermaids’ on his 1493 voyage to colonize the Americas: “In his journal he described the encounter with three mermaids that elevated themselves above the surface of the sea…“Columbus, disposed to give a wonderful character to everything in this New World, had identified these misshapen animals with the sirens of ancient history’”, explained historian Washington Irving.

Questioning the sanitized, cis-gendered, commercilaized image of ‘mermaids’ in the 20th century, with their more myserious, magickal, and terrifying historical antecedents, all now under threat with 21st century late-stage disaster capitalism creating mass oceanic eco-cide – ‘SIIRENX’ is a queer unpacking and liberation, unpacking and embrace of the ‘femme’ in all of us, against imposed Eurocentric ideas of ‘masculinity’ – yet confronted with complexities of ‘decolonization’ from an infected, ‘mestizo’ body and identity.

Responding to the theme of this year’s SHOUT Festival, Sebastian responded: “‘How Am I Feeling Now..?’ Good question… so, aside from desperately trying to survive this intense year – I’m currently feeling very lost, a bit isolated, and displaced as a queer person living in the cis-het suburbs of the West Midlands, since I moved back out of London. So I see this new ‘persona’ of the SIIRENX having emerged, or rather manifested themselves, out of this difficult space of wanting more queer visibility but also the struggle and fear of that by navigating a new life in a small rural town – which brought up lots of past trauma’s around the ideas of of ‘belief’ vs. ‘existence’ and validation (but in whose eyes?)… feeling again like some kind of mythical ‘cryptid’, dredged up from the deepest ocean or far-flung mysterious land. Now in the 21st century, we have this incredible double-edged ‘sword’… this power of the internet and live-streamed video etc. we are more connected than ever, where our existence can be validated etc., but are also ever closer to ‘trolls’ and those who only wish to communicate hate, violence, and invalidation towards us…” (Sebastian, 2020)

This is a work-in-progress performance previously developed with generous support from ‘DOMESTIC’ online performance platform curated by hAb/Word of Warning (Manchester) in August 2020. Feedback is highly welcomed – Sebastian will post a short feedback form after the livestream or contact me via the social media links below About the artist: Sebastian H-W is a Queer:Poz Latinx Live Artist based in the West Midlands (pronouns: he/they).

0 replies on “Micro Commission: SIREN X [bath-time with a mer-man-maid]”