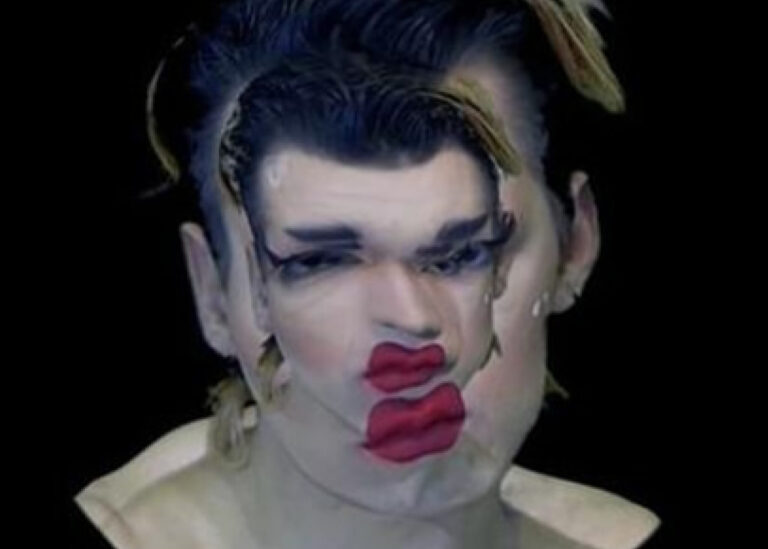 This specially made piece for SHOUT Festival is a multimedia, clown-performance that has been a work in progress for over a year now. Imagery and visuals designed by Cake Boi are projected onto their body which they interact with. Each version is a remix of the last, relative to the new venue and the audience, and has developed into a vehicle for
them to discuss a range of topics: primarily current affairs and emotional well-being.
An introduction to the world of Cake Boi, the piece will encompass graduating with a drama degree into a pandemic, moving back home and living whilst struggling to define their own gender identity.

2020 has been quite a year for Cake-Boi. Difficult questions keep arising such as what is a ‘Karen’? And
why do they want to speak to the manager so badly? Half autobiographical, half just bizarre they intend the World of Cake Boi to be an intimate portrayal of what it means to be non-binary and live in a hyper-digitalised society today.

Samuel is a drag artist, film-maker and graphic designer who has recently graduated from the University of Manchester studying drama. Samuel is interested in queer performance and queer stories and how they are represented in mainstream media. A self-taught film-maker who during lockdown has been creating drag performances for digital drag shows, his most recent
performance was for Macho Man Drag’s digital show ‘Return of the Kings’ for which he created a lip-sync performance to John My Beloved by Sufjan Stevens and Nonbinary by Arca exploring the idea of multiple identities. Samuel’s drag persona is Cake Boi, a disco dancing, Oscar Wilde reading, Streisand ticket holding
friend of Dorothy’s. Beginning as a form of clowning Samuel has since developed my medium of work into drag, honing my make-up and costume skills. Cake Boi now looking to develop my
clown/drag work into a larger show.
Whilst in lockdown Samuel also created the short film ‘The Moon’s Revenge’ for The Future of
Cabaret by Queer Family Tea. Adapted from Joan Aiken’s fantasy tale he combined animation,
puppetry and drag to create an immersive storytelling experience.

0 replies on “Micro Commission: The World Of Cake Boi”