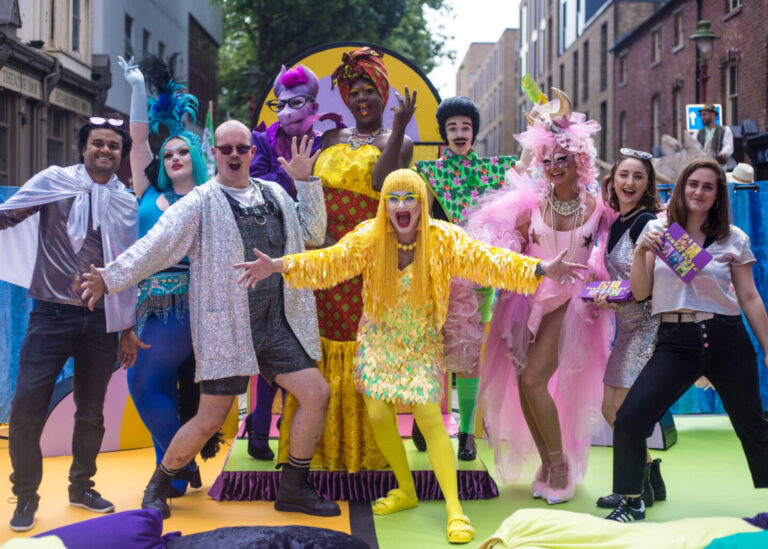 ‘Whatever you dream of, I believe you can be…’

Step into the unforgettable magic of Fantabulosa! for an extra-fabulous drag show for families and children broadcast directly into your homes.

Join us in our fantastical world of imagination, storytelling, and glitter where boundaries are forgotten and everyone and anyone can be whoever they want to be.

With performances from some of the UK’s leading drag artists, join the world’s only drag show for kids (and grown-ups too) as we bring you a digital feast of storytelling, lipsync, sing-a-longs, and dancing. So why not get on your most fabulous outfit, get comfy, and join us in the comfort of your own home for a F-F-F-F-FABULOUS show.

Fantabulosa’s Digital Drag Show For Kids is open to anyone, young and old, who wants to experience the joys and freedom of self-expression.

Fantabulosa is an interactive public space drag show for kids, bringing to life queer positive children’s stories through lip-sync, song, games, dance, drag performance. Created in Birmingham, the show has been touring the UK since 2018 to critical acclaim. Showcasing some of the UK’s leading drag queens, kings, and things, Fantabulosa is a fantastical pop-up world of imagination celebrating self-expression and championing difference. Disrupting the narrative of public spaces through drag, storytelling, music, and glitter, Fantabulosa is a space where boundaries are forgotten and everyone and anyone can be whoever they want to be.

Resources and media (including songs, and a downloadable activity booklet) can be found on our website: http://www.fantabulosa.co.uk/media/